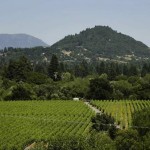 It hardly seems like a year ago but we recently had our annual Fitch Mountain Association pot-luck and state of affairs at the villa picnic grounds. Donita Proctor opened the get-together by welcoming everyone and promptly introducing 4th District Supervisor Mike McGuire who spoke to us about several issues. This will be Mike’s last FMA attendance as district supervisor as it looks like he is headed to Sacramento as our next state senator.

He started by stating that the county has thus far made over $120m in budget cuts which included the elimination of 520 county employees. The county will have increased its property taxes assessment by over $12m, which will lead to a $21m budget surplus this year. He also said that the county has put approximately $8m into county road repair and construction and that they are looking to put another $100m into road rehabilitation. Funding for the new stripping and road reflectors on South and North Fitch Mountain Road came from a federal grant which included several county roads.

Of local interest McGuire said the county will be putting about $250m into the county park system which will include raising the Memorial Beach dam eight feet and the remodeling of the bathrooms. The project won’t start until after the Memorial Beach bridge repairs are completed sometime next year. We also now have funding in perpetuity a full-time sheriff deputy to patrol holiday activities at Camp Rose and Del Rio. The deal to buy Fitch Mountain for a Sonoma County Open Space Park now 99.8% done said McGuire but, then again, we have been waiting for this since 1992. 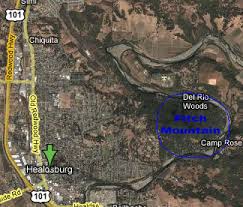 McGuire was then happy to report on the success of one of his long-time projects. He and the FMWS Advisory committee have work extremely hard to straighten out what was a very inefficient water situation on Fitch Mountain. Three years ago the lack of maintenance reserves prompted a rate increase of 36% over three years. Prior to the rate increase, the system was nearly bankrupt and now there’s a $198,000 reserve, built up in the last 3 years and we won’t see any rate increases over the next two years. In addition, Fitch Mountain will be purchasing water at a wholesale rate from City of Healdsburg which will save users $300-400k over the next several years.                                 The savings are a result of the City removing the operations and maintenance charges that we had been paying for, but for which the City didn’t provide.

McGuire then got into drought related issues when he said that our U.S. Congressional Reprehensive Jarred Huffman is working to get changes through congress that would separate the Lake Mendocino water reserves from the storage levels of the much smaller Lake Pillsbury. As we all know Lake Mendocino was drained by over 30% at the start of the drought in January of 2013 due to outdated Army Corp of Engineer regulations. He also said that one the engineering designs are complete they will be looking to raise Lake Mendocino’s Coyote dam by 30 feet which would double the lakes 100 acre feet capacity. Unfortunately, it looks like this project is still a good six years out. Lake Mendocino currently has a 10 month reserve with Lake Sonoma at 2.5 years.

Mike finished his talk with an announced change in the flight patterns at the Santa Rosa Airport will now be moved away from Healdsburg and Windsor and that as of August of this year we will all be entitled to two free low-flush toilets (1.6 gal to .8 gal) and free installation.

Donita commented on the fact that Fitch Mountain residences were not saving water. There were 1.240 m gallon used in April and 1.511m gallons used in May. She said this increase is probably due to the seasonal vacation rentals but more needs to be done to conserve water usage. The June figures were not available. There also appears to be an 11.77% water loss somewhere on the mountain. This loss figure is within the EPA guidelines but she suggested that everyone should watch their water bill for over usage and to check their meters. Even though we can’t vote for it an anti-fluoride spokesperson encouraged us to attend a workshop on the matter later in the summer.

Next up were the fire guys. Healdsburg Fire Chief Steve Adams said that by the time you get called on your land-line about a fire on the mountain the situation has probably already gone from containment to evacuation. So he suggest people be vigilant about fire awareness. He also suggested that we sign up with an internet service called NIXEL which automatically notifies subscribers of police and fire announcement in any particular zip code anywhere in the country. The Cal Fire guys said that they have two airplane tankers, a helicopter, five trucks and hand crews available for any fire in their district, which includes Fitch Mountain. 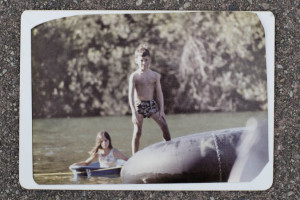 The last item on the agenda was from Al Pucci who said that the seasonal dam structure at Del Rio beach was being removed in August at the cost of $282k. The funds came from Del Rio tax assessments and grants. Since the Del Rio summer lake has such an historic connection to our community it will be sad to see it go.