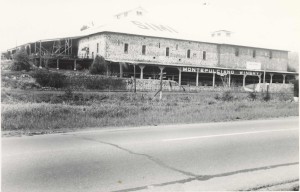 It seems fitting that during our annual grape harvest, we take a look at the early history of the industry that wines, dines and supports our town.  Not only does Sonoma’s wine industry account for about 40% ($20 billion) of our county’s annual gross income but it has also fostered other businesses such as the one billion dollar per year tourism industry. All of this has transformed Healdsburg (like it or not) into an up scale market including designer shops, restaurants and hotels with full service spas. One wonders what George Miller would think of all this.

Prior to George Miller Sr. establishing Healdsburg’s first commercial winery, wine was made by many small home producers for their personal use and as part of the barter system which was prevalent in NorthernSonomaCounty before the establishment of banks and the beginning of our modern economy. In a letter from Lindsay Carson (brother of famed explorer Kit Carson) to his great-grandfather in 1857, he wrote “money is scarcer than I have ever known.”

It seems that one of the first things any European settler did here was to plant grapes. The Russian’s at FortRoss are credited with the establishment of the first vineyards. The Franciscans at the Sonoma Mission first planted grape vine in 1823 about five years after the Russians planted their first vineyard. Most of the early vineyards featured Mission grapes. In 1860, Davenport Cousins was listed as the first wine producer in the DryCreekValley. His ranch, which is now the site of the Ferrari-Carano Winery (8761 Dry Creek Road) featured a post office, saloon and grocery store. The site was known as Cozzens Corner and was operated by Cozzens and his son for some thirty years.

In 1864, A.J. Galloway was credited with establishing DryCreekValley’s first vineyard. Gene Cuneo, felt that Galloway’s vineyard, which is now the Cuneo Ranch (2470 Dry Creek Road, was primarily planted in Zinfandel. To give some idea of the grape varietals being grown in the area in 1883: 395 acres were planted to Zinfandel; 240 acres to Mission; 64 acres to Malvoise; 50 acres to Golden Chasselas;  18 acres to White Reisling; and 40 acres to other varietals.

As an aside, it is interesting to note how land values, today by far the most costly element of any vineyard, of the period were little more than an incidental. The following is an actual cost accounting reported by Agoston Haraszthy (founder of Buena Vista Winery) when he planted 100 acres in January 1858:

It is believed that Healdsburg’s first commercial winery was established in 1862, during the Civil War, by George Miller Sr. A native Swiss, Miller came to SonomaCounty in 1853. He was first a partner in his uncle Felta Miller’s (along with Samuel and Thomas Heald) saw and grist mill located on Mill Creek off of Westside Road.

Of interest, it was local lore that Catherine “Katie” Miller, Felta’s wife, was a problem. This story is one of Sonoma Counties most told legends and tales. It seems Katie liked her hooch. Felta would often hide the “jug” from Katie who was known to appear at the back door of some of Healdsburg’s early saloons. Felta and some friends were leaving for a Fourth of July celebration in 1854, and he was concerned as to how to conceal a keg of whiskey that was in the house. Felta got an idea. He had one of his friends climb a tree and, unseen by Katie, tied it securely out of reach. After a diligent search she spotted the “treasure” high in the tree. After diligent thought she came up with a brilliant solution. She carried out a large washtub and placed it directly beneath the keg. Procuring her husband’s rifle she peppered the keg with several bullet holes. Katie was found by the returning party in close proximity to her favorite tipple, having had as much “independence” as was good for her. 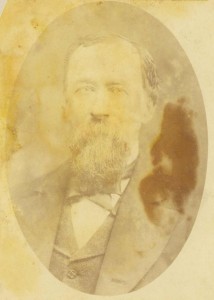 When Miller sold his interest back to his uncle, he and his wife Ursula bought about 12 acres that is bordered today by College, University, Grant and Powell Streets from the estate of Colonel Rod Matheson who was killed in an 1862 Civil War battle. After clearing, he planted eight acres in Mission and Hamburg grapes (6.5 to Mission and 1.5 to Hamburg) with the remaining four acres (the southeast corner of the property) reserved for the construction of the distillery and family home. The name of the winery was the Healdsburg Fruit Distillery, which produced “Quality wines and brandies distilled from grapes, apples and peaches.” Both Ursula and his daughter Celia (who was Healdsburg’s May Queen in 1869) worked the winery with Miller.

Some time before 1867 Miller moved the winery to the southeast corner of West (now Healdsburg Ave.) and Grant Street. He may have also taken in a partner during this time. A man named Mr. Fried was said to have worked with Miller at the winery, but no further record of him can be found.

The coming of the railroad in 1871 brought Healdsburg a boom in prosperity. With the trip from San Francisco now taking only four hours, the tourist trade took a sharp up turn, as did the sale of agricultural products to the now easily accessible Bay Area markets. In 1872 George Bosch and Alex Colson opened the first Dry Creek winery and produced quality wines from their 14 acres (around 1500 Dry Creek Road) of Mission and Zinfandel grapes. The Zinfandel grape had arrived from the East Coast during the Gold Rush and was first used as a table grape in San Francisco.

In 1873, a Frenchman named John Chambaud built a stone winery along the north side of Hudson Street, a little west of Front Street (one wall of the original building is still standing as part of the office building that currently occupies the site). It can be argued that Chambaud’s winery was the first in Healdsburg since this winery was actually within the city limits, whereas Miller’s first location was not. Chambaud grew none of his own grapes. His winery’s 20,000 gallon capacity was welcomed by the local grape growers. Vineyards were growing rapidly in the area and not all the grapes could be sold in the San Francisco market. Chambaud bought and crushed (using mostly Chinese labor) 200 tons of grapes for his first vintage. 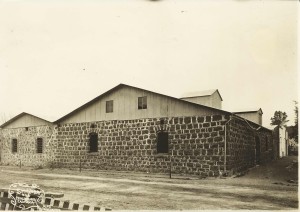 In the first half of the 1870’s several factors led to the first boom in Sonoma County’s wine industry (a cycle that’s been repeated ever since). First, the coming of the Transcontinental Railroad in 1869 opened up the Eastern U.S. markets; second, the French Phylloxera epidemic opened the European market to California wines for the first time. This caused a boom in both grape growing and wine making. In 1873 California wine production jumped 40% to 2,636,000 gallons. In the same year, Healdsburg’s wine was selling for 30 cents per gallon and brandy was selling for $1.50 per gallon. By 1876 the price of wine dropped to 10 cents per gallon.

In 1877, Miller sold his winery to Mr. A.E.S. DeWiederhold (a winemaker from British Columbia), but kept his home and the 12 acres of grapes. Miller then opened a butcher shop in downtown Healdsburg. He gradually transplanted his old Mission vines and had a vineyard of desirable dry red varieties by the early 1890s. DeWiederhold changed the name to the Fairview Winery.

The depression of 1876 forced John Chambaud to sell his winery to a cooperative group of vineyards organized as “The United Vineyard Proprietors Company” for $4,000. Chambaud stayed on as foreman until he moved to Cloverdale in 1880. The cooperative changed the name of the winery from Chambaud Winery to the Healdsburg Winery.

Pietro and Giuseppe Simi bought the Healdsburg (Chambaud) Winery in 1881 just in time for the next boom in the SonomaCounty wine industry. Giuseppe Simi arrived in California from his native Tuscany in 1859 and work for a time as a miner and later a produce farmer renting 2,800 acres of land in SacramentoCounty, 1,840 acres in KernCounty and 1,600 near Pescadero. Pietro sold the produce and made wine in their building at 429 Green Street in San Francisco. 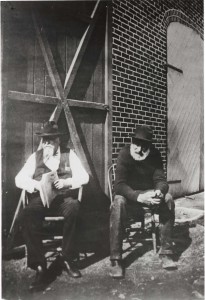 In 1868, Giuseppe moved to Healdsburg to buy grapes for the brother’s San Francisco winery. After they bought the Healdsburg Winery and, catching the wine boom, soon out grew the Hudson Street location. In 1883, Giuseppe bought 126 acres just north of Healdsburg. They cleared the land and planted 116 acres of mostly Zinfandel. They built a stone winery on the site and named it Montepulciano in honor of the Tuscan winegrowing town where they were born. The annual out put was 70,000 gallons of wine through the 1890s. Giuseppe was always in charge of the winery, while Pietro ran the business in San   Francisco. The Simi Winery is the longest continuing running winery in the Healdsburg area.

Meanwhile, DeWiederhold sold the Fairview Winery to Peter and B. Gobbi in 1882. Gobbi renamed it the Sotoyome Winery and moved it to the 300 block of West   Street (Healdsburg   Ave.). In 1884, a cousin, Julius Gobbi bought out B. Gobbi. They made about 60,000 gallons of wine annually and their wines had a “fine reputation, which commands ready sale in San Francisco as soon as prepared for the market. They also manufacture grape brandies, and the product of their distillery never has to wait for a market.”

Both cousins were from an Italian town named Dongo which is near the northern end of LakeComo. Both men’s fathers were vineyardists and wine producers. In 1869, Julius’ family moved to Ukiah where his father planted a vineyard. This is where Julius learned the business of vine growing and the rudiments of wine-making. Peter came to California in 1873 and worked in the dairy business in Petaluma and Bloomfield until he moved to Healdsburg and bought the Fairview Winery.

In the 1880’s Peter and Julius built a commercial building at 312   Center Street which still bears their name. Peter retired in 1895, but Julius ran the operation for some years to come. Both men had a fine reputation and were active in the Healdsburg community.

DeWiederhold kept his vineyard and built a small private winery that was maintained by his widow, Alice, until 1892, when it burned down. This was one of the numerous temperance movement winery fires around this date and was presumed the work of the fanatic “Drys.”

Today there are over 350 bonded wineries in SonomaCounty with eleven distinct and two shared American Viticulture Areas including the RussianRiverValley, AlexanderValley, and DryCreekValley, the last of which is known for the production of high-quality Zinfandels.

In 2007 the SonomaCounty grape harvest amounted to over 198,000 tons, exceeding NapaCounty’s harvest by just under 30 percent. About 80% of non-pasture agricultural land in the county is for growing wine grapes—63,825 acres of vineyards with over 1800 growers. The most common varieties planted are Chardonnay, Cabernet Sauvignon, Pinot Noir, Merlot and Zinfandel. The overall 2007 average price per ton was $2,081 up 5% from 2006.