Home > Fishing > THE HISTORY OF FISHING IN AND AROUND HEALDSBURG

THE HISTORY OF FISHING IN AND AROUND HEALDSBURG

A History of Fishing Healdsburg

In the beginning there was the water. The Russian River and its many tributaries including area creeks with names such as the Hoot Owl, Pine, Mill, Dry, Pena, Sausal, Redwood, Brook, Windsor, Board, Wine, Warm Springs, Macaama, Foss and Sulphur big and little.  Then came the fish  – The Salmon, the Steelhead, the Green Sturgeon, Hardheads, California Roach, Pacific Brook Lamprey, Russian River Tuleperch, Sacramento Black Chub, Sacramento Squawfish (“pike”), Sacramento sucker, and the Wolf eel. Then came the “fishers” – the bear, the cougar, the coyote, the raccoon, the eagle, the hawk, the osprey, the king fisher, the herons, the egret – and man.

The Healdsburg fishing is part of the Russian River drainage which runs from the Eel River in Mendocino County to the mouth of the river at Jenner, a 110 mile course and a 1500 square mile watershed.

The history of fishing in and around Healdsburg parallels the rich cultural heritage of the Healdsburg area itself. The first human fishers of the Russian River watershed were the Native American Pomo tribes who inhabited this regain for over 10,000 years before the European settles arrived. 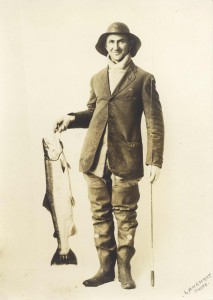 In 1909 Susan L. McMurray accompanied the Makahmo, a southern Pomo tribe which lived around Cloverdale, on a fishing exhibition on the Big Sulphur Creek. She described the fishing techniques of the tribe at a waterfall about a mile up from the Russian River. At this salmon hole, which means Makahmo in the Pomo language, the tribe would catch its winter food supply which was shared among participating families.

A very large basketry fish trap (made of grapevine or willow) was suspended by grapevine ropes under the fall. Salmon that failed in the leap up the falls dropped back and fell into the basket: At times, as many as 200 fish were caught in a day.

The Makahmo also river-fished using fish dams or weirs. Men, women, and children drove the fish into the trap by walking upstream, striking the water and tamping the stream bed while shouting; Kite-shaped scoop nets and nets that were attached to semi-circular poles were also used  For night fishing, a fire built on the bank attracted the fish and illuminated activities, as well as provided warmth. The salmon and steelhead were killed using a “fish club” while smaller fish (suckers, trout and pike) were killed by biting their heads off.

As salmon ascended the streams, they were also taken with a single-pointed, unbarbed fish spear; the point was usually made from the front leg of a deer. Eels were caught with dip nets or gaffs. Children were given miniature harpoons and urged to spear suckers as their elders speared salmon.

During the summer basketry traps were used to catch fish. Angling was used during this time of the year by using willow saplings for poles. Two thorns were tied together to form an acute angle, a nasal bone of a deer or a double-pointed “hook” (gorget) made of Manzanita wood were used for fishhooks. Line was made of fiber extracted from wild iris leaves and grasshoppers were the primary bait. By September, the rivers and creeks had dried to isolated pools. The bulbs of soaproot and other plants were ground and stirred into the pools. The poisons stupefied the fish which were easily collected as they floated to the surface.

A big change came in 1857, when wet fly fishing with a light single-handed rod, about ten feet long, came into vogue. The discovery of the false-cast early in the decade, which was the beginning of dry fly fishing, began the trend toward shorter, nine to ten foot split-cane trout rods. Also in the 1850s the materials also changed as both trout and salmon rods were built of greenheart, lancewood, bamboo and whalebone. Salmon rod lengths remain in the fifteen to eighteen foot range, but no longer were they spliced, and the ferule had finally become standard method of fitting sections together.

Although the Mexican government had fish and game laws as far back as the 1830s (John Sutter was a Mexican game warden in Northern California), the first California fish laws were passed in 1852, two years after California had become a state, protecting salmon runs. In 1861 the first closed season for trout was established and in 1885, the state published the first Fish and Game laws.

By 1888, fishing by explosives, cage, pound, weir or set net was prohibited, but it wasn’t until 1927 when spear fishing for trout and salmon was outlawed, that angling finally became the only legal method for catching fish in the Russian River watershed. In fact, an article in the 1879 Healdsburg Enterprise advised how to spear salmon, “The best way to catch them is to go at night, with lights and spear; when the fish cross riffles they can be gathered in rapidly. In cold weather salmon are more apt to stay in deep water, seldom venturing to cross riffles.”

The illegal poaching of steelhead and salmon has been a continual problem on the river. In 1891 the Sonoma County Tribune reported that “several persons have been killing large numbers of salmon in Dry Creek by the unlawful use of Giant Powder. Most of these parties are well known to the neighbors and will be severely dealt with if caught in the act.”

In 1903, another Healdsburg Enterprise article reported: “Two Healdsburg youths, pleaded guilty Monday afternoon to a charge of using dynamite with which to kill many fish in the Russian River, and Judge Burnett imposed a light sentence on them. He gave them the minimum allowed by law, a fine of $250, and allowed them the alternative of serving out the fine in the county jail at the rate of $25 per day. The lads will be given a room in the upper story of the jail and not be incarcerated with the general run of criminals.”

In 1872, the state legislature passed an act requiring fish-ways or “in-lieu” hatcheries where dams or other obstacles impede or prevent fish passage. The creation of the state’s hatchery system created California’s modern fresh water fishing sport, that we enjoy today. In 1902, the Eel River Hatchery made the first plant of steelhead trout fry in the State. Since that time millions of trout, steelhead and salmon have been planted in the Russian River and its tributaries.

Today, the Warm Springs Hatchery at Lake Sonoma raises and releases 110,000 Coho (Sliver) salmon and 300,000 steelhead each year, with the limit being two hatchery trout or two hatchery steelhead per day with no salmon.

After WWII, many of the chemicals that were developed during the war were now being used for crop management. Human waste from sewer and septic systems were finding its way into the river and the fish population began it decline. The State’s waterway were becoming so polluted that in 1949 the first pollution act was passed by the State Legislature.

The continual water release from Lake Mendocino’s Coyote Dam since its construction in 1958, plus the mining of the river’s gravel bars contributed in the “flattening out” of the river bottom. Many of the old fishing holes around Healdsburg, which were identified by long time local fisherman Leroy Danhausen in a 1961 Heritage Paper he did while at Sonoma State, had disappeared. Holes like “Ruby Hole” which was named for an old steelhead with bright red gill plates; and “Dinner Hole,” so named because if you started out fishing south from Memorial Dam, by lunch time you were at the Dinner Hole; and “Teacher’s Hole,” a hole on the north side of Fitch Mountain where a couple of teachers could get in a few hours of fishing before class, are all gone. The fishermen of that time were pretty pessimistic about the future of steelhead fishing on the Russian River.

Today, thing are looking up. Barbed hooks were outlawed in 1999 and the Russian River Coho Recovery Work Group was implemented in 2000. Organizations such as the Sotoyome Resource Conservation District and the Russian Riverkeepers are supplementing governmental organizations such as the Sonoma County Water Agency and the California Department of Fish and Game in keeping the river clean. Programs such as SRCD’s Rural Road Sediment Reduction, Riverkeeper’s Water-Watch, and the DFG’s Classroom Aquarium Education Program have greatly improved not only the Russian River watershed’s fish habitat but have also educated adults and students in keeping the habitat fish safe. And if you look closely maybe those old fishin’ hole aren’t really gone after all.